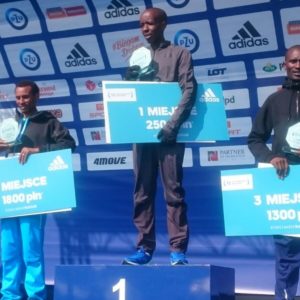 This year’s Warsaw Half Marathon (25 March) could hardly have gone any better for two Run-Fast athletes as Ezrah Sang won the men’s race and Polline Wanjiku won the women’s.

Ezrah broke clear of his rivals – fellow Kenyan Hillary Maiyo and Ethiopian Kassa Mekashaw – with around four kilometres of the race remaining. He crossed the line solo in 61:37, his victory as a Run-Fast athlete. His win also continues the trend of Run-Fast athletes excelling in the Polish capital: teammate John Lotiang won this race in March 2017.

Polline was returning to Warsaw for the first time since setting the course record (69:06) there in 2014. Yesterday she became the first repeat winner of the race, stopping the clock in 70:01. She had lost all her rivals before the halfway point and her finish time was the second fastest time in the race’s history.

On Saturday, one of our British athletes Dan Studley made his senior international debut for his country at the IAAF World Half Marathon Championships in Valencia. Against some of the finest distance runners in the world and in breezy conditions, Dan finished in a commendable 66:20. Speaking afterwards, Dan said “It was an amazing experience and there’s so much to take away from the weekend. I’ve never done a race quite like it.”